IBI had a few years in a row where we set up camp in downtown Fargo and built a variety of flood control projects, all for the Metro Flood Diversion Authority. These permanent flood control measures were set in place as some of the first steps to permanent flood control for the City of Fargo and IBI had the honor of being involved in four projects and certifying that everything was constructed to the highest standards. All four of these projects were within a two mile stretch of 2nd Street, with the majority of the work taking place from Main Avenue to 7th Ave N along 2nd Street north.
Between the four projects, we got to flex almost all of our trade muscles. We moved over 85,000 yards of dirt, installed 29,000 SF of sheeting, handled almost 2 million pounds of reinforcing steel, and poured, formed, and stripped over 15,000 yards of structural concrete. The concrete work was varied and included a pump station, thousands of feet of floodwall, and a retaining wall. We also managed our subs as they demolished existing underground infrastructure and installed new materials, backfilled, and then relocated and poured a fresh set of roads on the other side of our new floodwall.
These projects were kind of like an iceberg; the bulk of the job is not visible to the eye because it’s underground, but it’s keeping the city running smoothly. The new pump station moves water collected through the new infrastructure and discharges into the Red River, but you’d never assume that the pump station could move thousands of gallons of water per minute from the building that blends into blocks of floodwall. The retaining wall has sheeting and a shear key that is over ten feet below the sidewalk that pedestrians walk on.
One focal point of the project was the monument and plaza area incorporated. The river, while very fickle and flood-prone, is gorgeous to look at, so an area with colored concrete, benches, and an illuminated monument are present in the center of the project and allow pedestrians to access a new pedestrian and bicycle path on the river-side of the floodwall. Should the water level rise, there are embeds cast in the concrete that allow a temporary floodwall to fill in that gap and complete the line of flood protection. It’s a very pleasant green space that will allow citizens to enjoy the beautiful nature of the Red River valley for years to come.
All in all we’re very proud of the project and pleased to know our crews were the ones to build it all. 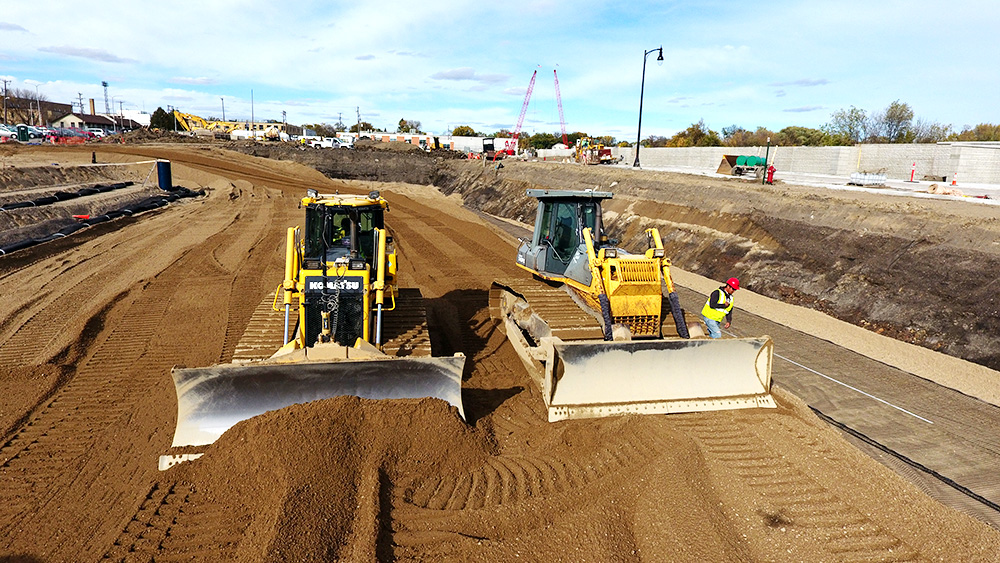 Ready to get started with us?